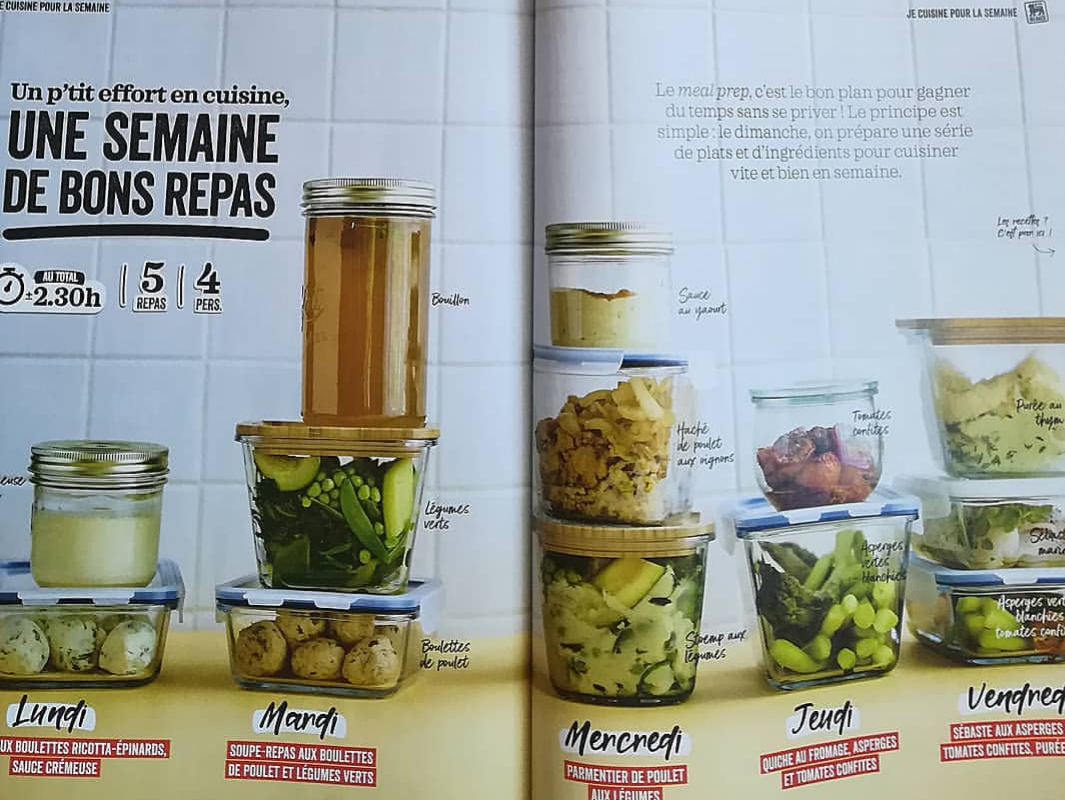 How are micro-techniques of everyday life and efficient private self-techniques relating to political economic regulation techniques?

How are forms of subjectivation produced and are evolving within programmes that call upon subjects for rational behavior? How this neoliberal Rationality is involved with powerful subjectivation processes that tangle up self-responsibility with cuts in social services?

How photography beautifies the world?

Why food is getting that important again? 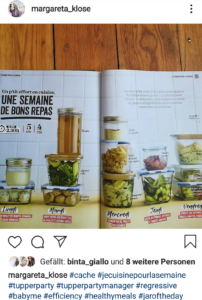 Photography is beautifying the world and sometimes tries to teach us how splendid it is or should be. It changes the idea of reality and realisms, it is real, it orders, structures, collects and recycles the real. It reproduces, packages the world, recycles it as an artefact of cliché. Especially the print: the analog image of an image is like a proof, an evidence and a souvenir of daily life. Like an archive it preserves the exotic which gets near and clear in a close-up and it captures common every day objects in a distance, but on a display what was already described.

The photo shows in frontal linear perspective 5 staples of Tupperware and Preservation Jars in various sizes and with various fillings. Each container contains a special filling described with a font that should resemble handwriting and is describing, tagging the image: “Boulettes”, “Bouillon” or vegetables and sauces. The containers are displayed in between close-up and a distanced frontal gaze captured in a horizontal frame: It’s an artefact of cliché, recycling the real, what was already described. It is a “view-through” provided by horizontal linear perspective and Instagram’s bleaching food filter app that provides ultra transparency and insight into the containers’ content. The static containers are photographed in front of a tiles’ grid that underlines the linear perspective that establishs an imaginary stable observer and horizon. It evokes a static, stable and safe ground in front of the biedermeier style background: the clean kitchen’s bleached white tiles. This is not only a proposal for taylorism at home, this image performs perfectly the container principle: the Modul Design for modularisation and standardisation, flexibilisation, acceleration and efficiency. CONTENT IS KING! A brilliant example for the shift from product and commodity to the homo economicus’ production & competition and self management. This is a representation of the rationalisation of the self and the self organization of everyday working life.
WE MUST REMAIN REALISTIC IN OUR APPROACH!
The latin word “res” means thing, matter, but also property, affair, business. In comparison to the energetic and dynamic greek “energaia”, “res” is really static and reminds of real estate and tastes like sour pickles. Let’s focus on neoliberal rationality due to the fact that individual food rationing is not a private concern dealing with individual time management and health care but a public matter of concern regarding the political economization of the social fabric en général and specifically the subject in progress between regression and production. One of the most important strategies of neoliberal rationality is the transformation of responsibilities/public matters of concern (water, food, health care, housing, work and risks like disease and poverty) into “private” self responsibility. This aims at benefits, efficiency and safety and implicates most of all fear: fear of disease, hunger and financial disasters e.g. increasing inflations (for example in turkey 2017-2018: food prizes were increasing up to 13 per cent, especially cucumbers, so people were pleased to have stored some turşu, cache, pickles).
So let’s prep!
TIME AS HORIZON
“Le principe est simple: le dimanche, on prépare une série de plats et d’ingrédients pour cuisiner vite et bien en semaine.”

This horizontally arranged meal table chart proclaims to give you a full food plan for a week, one working day ration for every single working day’s dinner. In only 2.30 hours you should be able to prepare on Sunday, the non-working-holiday-mayday-day, 5 repas à 4 personnes. But you wouldn’t lose, you should even gain time: “Le meal prep, c’est le bon plan pour gagner du temps sans se priver!” Although you would be rationing yourself to a daily ration of Tupperware, ça serait “sans se priver!”

This picture is a horizontal linear image for time, that kind of time which is routinely planned and structured by every day working life: the time table from Monday to Friday. In the modern western society this routinely planned time table provides a kind of safety within a time model that doesn’t provide any certain future: Elena Esposito proclaims in her talk “Rational divination” that today in modern western society future cannot be known by humans, gods or algorithms.
https://www.youtube.com/watch?v=rSxP_m9kLbk
She describes future as an arising horizon that cannot be reached and will never be known.
Nevertheless linear horizontal images of time and space are changed by medias like our smartphones, our Body Brain Extension. We are scrolling up and down, daily reminders are popping up on display, we are talking and swiping more and writing and reading less from left to right, from right to left. Ways of seeing and planning are changing within the artificial social reality due to our hybrids and souls: our smartphones. Centralised optics  like in this food image provide certainty and safety. It introduces the notion of a linear time, which allows mathematical prediction and linear progress: a view onto a calculable future or rather prediction. It computes a mathematical, flattened, infinite, continuous and homogenous space and declares it to be reality. Linear perspective creates the illusion of a quasi-natural view to the “outside,” as if the image plane was a window opening onto the “real” world. This is also the literal meaning of the Latin perspectiva: to see through.
Let’s remember Down by Law’s Window Scene in the prison: https://www.youtube.com/watch?v=aGqWh8ZAZX0
One is not looking through but at a window: This space defined by linear perspective is calculable, navigable and predictable. It allows the calculation of future risk, which can be managed. But while empowering the subject by placing it at the center of vision and on a stable ground, linear perspective also undermines the viewer’s individuality by subjecting it to supposedly objective laws of representation.
Contemporary philosophers and artists point at a condition of groundlessness due to the virtual ground that creates a vertical perspective of surveillance and overview in far distance and close-up. The observer becomes a floating drone and can get an overview of an imaginary  stable ground. It is a superior remotecontrolled gaze onto inferiors. With photography the gaze already became mobile and mechanized but these new relational technologies disembody and outsource the gaze: It becomes all knowing, intrusive, extensive, micro and macroscopic, an extreme radicalization of linear perspective’s powerful paradigm. Many food videos and images on Instagram are filmed from above, in bird’s eye perspective, a remotecontrolled gaze of the smartphone. The photographic lens, this tiny smartphone crap, is not indexically related to reality but to hyperreal representations: not of space as it is, but as we can create it.
Hito Steyerl, In Free Fall: A Thought Experiment on Vertical Perspective, in: Hito Steyerl, The Wretched of the Screen, 12.
TARGET: REGRESSIVE BABY ME
So be prepared! Preparing is the modern prediction and tastes completely different than trying to understand phenomenas of the future: It tastes like overnightoats. It is a desperate regressive way for preparing the present to face and try to control a future that remains uncertain. Overnightoats are cheap & efficient and good for babies & poor people with bad teeth & bad taste. But preparing tomorrow’s or even the whole week’s lunch box is a proper way to deal with the contingency of the supermarket. I don’t need to face the more and more indeterminated openness of possibilities and can resist the overabundance and the supermarket’s trance during lunch break. I can be happy to know that I don’t know what’s all provided there. Carrying my cheap, individually prepared lunch in my container is my Calculus of Probabilities, a practical know-how for dealing with tomorrow. This is a particular, individual and very specific prediction: tomorrow’s lunch is the result of today’s intervention. Just do it, prep it, keep it up and eat it up: a very practical way to deal with the overabundance of our affluent society. Regressive Baby Me! Algorithms as well are focused on particular and very specific prediction and don’t care at all about the future. They don’t want to understand, they only want to know how. It is all about me, Babe, me and my tomorrow’s decision. Practically, numbers can speak for themseves if they don’t want to understand why. We don’t know how algorithms come to a specific decision, based on data disregarding the disenfranchised. It is based on me, my Big Data Base Trace, on my white middle class diary, on my daily food content on Instagram.
THE WORLD IS BEAUTIFUL!
Photography still beautifies roughly the world, relational computational photography creates with algorithms dangerous beauty disregarding the disenfranchised.

Computational photography: The lenses of contemporary phone cameras are tiny crap, so half of the data that is captured by the sensor is noise. An algorithm scans all other pictures stored on the phone or social media networks to clean the noise or to discern the picture from inside the noise.
“It analyzes the pictures you already took, or those that are associated with you, and it tries to match faces and shapes to link them back to you. By comparing what you and your network already photographed, the algorithm guesses what you might have wanted to photograph now. It creates the present picture based on earlier pictures, on your/its memory. This new paradigm is being called computational photography.”
Hito Steyerl, Proxy Politics: Signal and Noise, 1, in: e-flux journal #60, december 2014.

To participate in an image, rather than identify with it, would mean participating in the material of the image as well as in the desires and forces it accumulates.

Instagram’s food images are not new innovations, but part of a centuries-long history of the still life and in general sculpting space and human consciousness using ideology masked as objective reality based on the view of a one-eyed and immobile spectator as a norm. This view is itself assumed to be clear, natural, scientific  and objective. Today’s still lifes on Instagram remind me of Albert Renger-Patzsch‘s modern commercial still lifes. 1928 the German photographer published “Die Welt ist schön” “The World is Beautiful”, a collection of one hundred photographs that form revealed patterns of beauty and order such as botanical studies, images of traditional craftsmen, formal studies of mechanical equipment and commercial still lifes. “Albert Renger-Patzsch was a pioneering figure in the New Objectivity movement, which sought to engage with the world as clearly and precisely as possible.”
https://www.tate.org.uk/whats-on/tate-modern/display/albert-renger-patzsch
BACK TO ORALITY: ORAL SEX
#foodporn
Focus on food: What the food? Why food?
Sex (lat. secare) means cut, separation, dissolution. The mouth brings separated things such as body fluids, food, drinks or words together. In her “Studio Elektra” talk “Oral Sex” Philosopher and artist Elisabeth von Samsonow describes philosophic speech as pure Oral Sex: the mouth is a plug that can take and contain something and ingest it as well as it sends noises, words, spit and so on.
https://youtu.be/bFGaIFzEmFk
We taste and experience the world with our mouth as babies and adults. Food and meal preparation gets again really important due to an orality of a society that is focused on virtuality and individuality. Back to primitive oral erotics: Instead of licking their smartphones, people can celebrate their Orality surrounding and sharing and spooning and enjoying a BIG HOT POT on the ground together.
LET’S PREP FOR OUR ORAL TURN.
TASTE THAT!