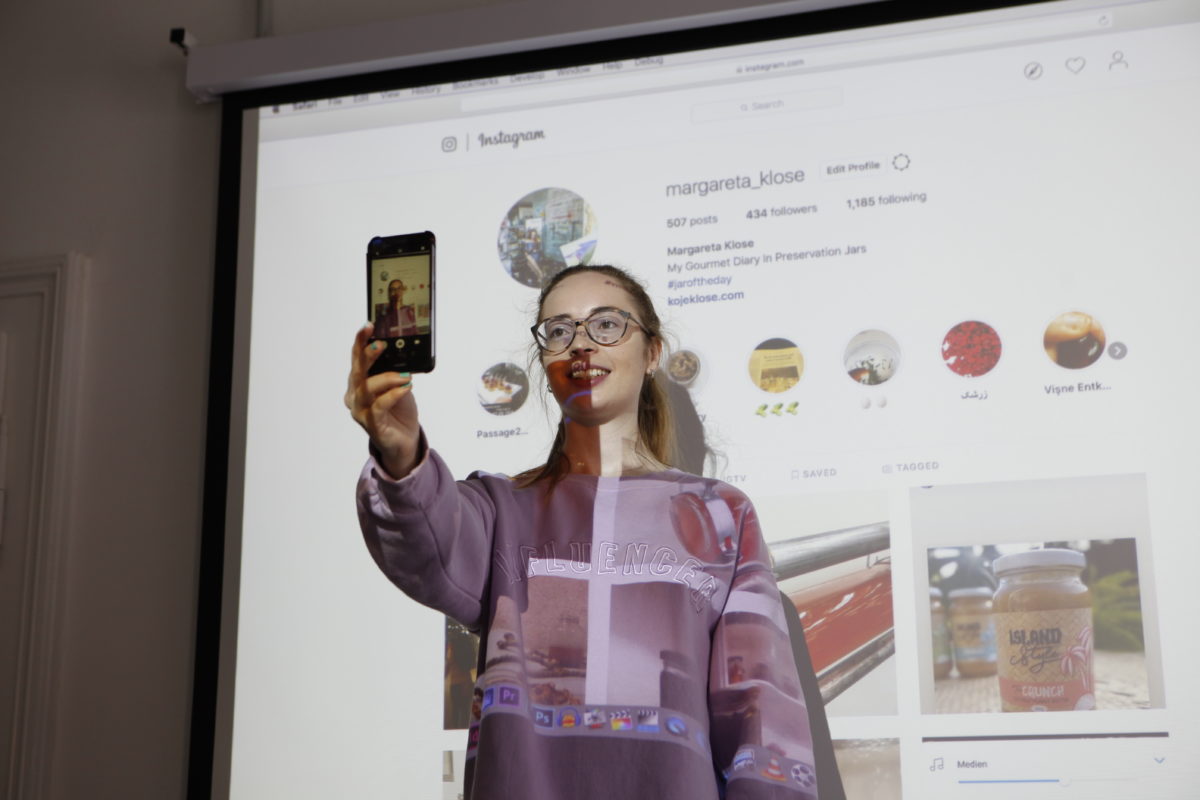 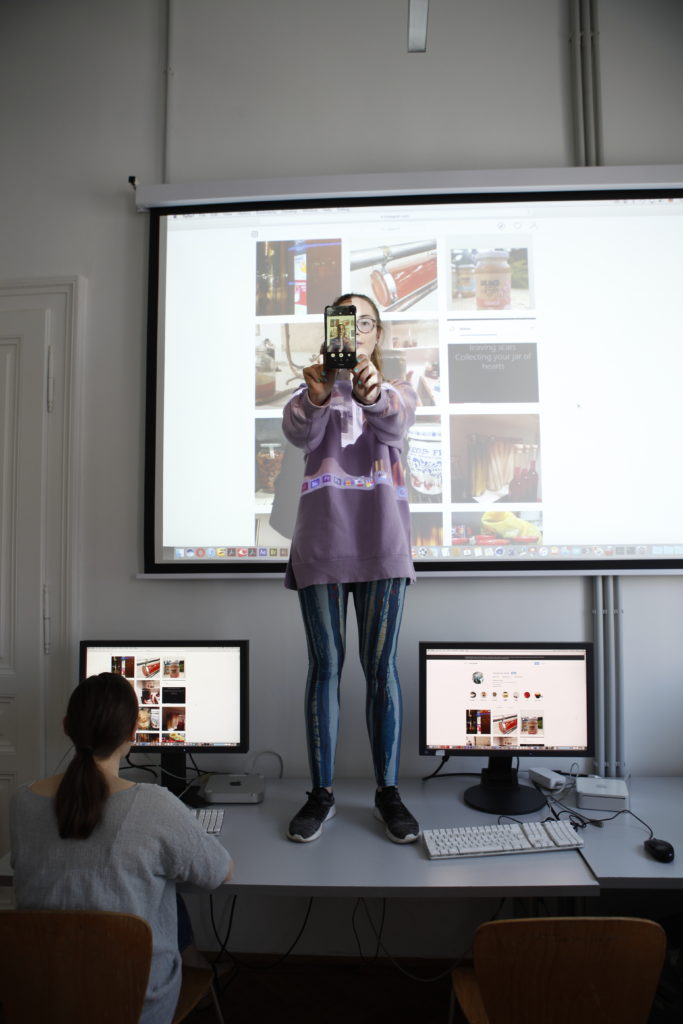 Artist and Sociologist Anna Weisser is picking the pickles of my pick list of pickles: Moving food Instagram pictures are projected on the Body which projects its own picture, the shadow, onto the medium, the wall.

Body, Floating Pictures and Technology coincide in the dialectical Image, the Photograph & Video and its Documentation and then Digitalisation on websites as presentation of a presentation circulating in the world wide web after the act.

How to participate in an image?

While thinking about the documentality of food pictures, ecology movements and VEGANIZATION I am collecting Instagram pictures of “zerowaste” vegan Influencer of generation Y and Z and NGOs. Public relations proclaiming to be “zerowaste” disregard Instagram’s documental economic grid as well as digital waste that has grown exponentially over the last decade as storage of data has shifted to the online sphere to throw all of our recorded information into one big digital cloud of computers.

Computational photography: The lenses of contemporary phone cameras are tiny crap, so half of the data that is captured by the sensor is noise. An algorithm scans all other pictures stored on the phone or social media networks to clean the noise or to discern the picture from inside the noise.
“It analyzes the pictures you already took, or those that are associated with you, and it tries to match faces and shapes to link them back to you. By comparing what you and your network already photographed, the algorithm guesses what you might have wanted to photograph now. It creates the present picture based on earlier pictures, on your/its memory. This new paradigm is being called computational photography.”
Hito Steyerl, Proxy Politics: Signal and Noise, 1, in: e-flux journal #60, december 2014.

To participate in an image, rather than identify with it, would mean participating in the material of the image as well as in the desires and forces it accumulates.

I CAN’T BE YOUR HERO, BABY!

My new year’s resolution since 2018 is “My Gourmet Diary In Preservation Jars” #jaroftheday on Instagram while thinking about international food production and how gathering to eat and drink and circulating pictures of food can connect cultures and rituals from different times and places. I have frequently used food package products such as jars and foils to produce sculptures since 2013 with Nicole Wermers. The jar menu on Instagram invites to virtual window shopping and applies inventive approaches such as fermentation and pickles, creating vivid veggie and nutritious snacks, sweets, drinks. Through these, my Instagram menu explores waste-free food and drink preparation, the “gourmet”, and authenticity in relation to migration of foods and customs. Food is presented in still-lifes as representation of production, gender, class and self-representation. The documentality of these pictures interests me: how Instagram users create diaries, how these virtual pictures become documents and real physical entities, which create powers that extend human memory, and thereby sustain new complex forms of social order.

Since 2018 – as part of my Instagram “Gourmet Diary in Preservation Jars“ #jaroftheday inspired by Martha Rosler’s “Budding Gourmet“ – I am acting as veggie Zerowaste-Influencer @margareta_klose who collects like a sociologist, or better: jar-fetishist, followers and pictures of these containers that are transparent and between the public and the private, that circulate on the worldwide market. I collect and frequently post pictures of self-made food at home, dishes in restaurants, found pictures of lesswaste-influencers recycling their jars, shop displays while window shopping in cities. Regarding this strange hype surrounding the jar – which was called Mason jar in America, named after John Landis Mason who first invented and patented it in 1858 and Weckglas, patented in 1890s in Germany (einwecken=to pickle) and Rexglas in Austria (einrexen), “My Gourmet Diary“ explores the ideological processes through which food preparation comes to be seen as “gourmet”, how it is packaged and becomes a product of
national culture in the competitive world of international markets.

Instagram is a very interesting medium to observe as a hybrid of social networks like Twitter (Hashtags), Facebook (Home feed but only with pictures/videos, not friends but followers), Snapchat (Instagram Direct and Stories) and Pinterest (collecting and archiving found pictures). It is a virtual market space for mobile, visual and social communication: while window shopping you can visit 12 windows simultaneously on the page of a profile or business account or hashtag group. While scrolling up and down Instagram sharers, curators, creators and collaborators are themselves a digital human resource and product of Instagram’s circumstances and the Iconosquare-Brandindex. Instagram’s algorithm is controlling your home feed. The relational Computational Photography creates the present picture based on earlier pictures, on its memory.