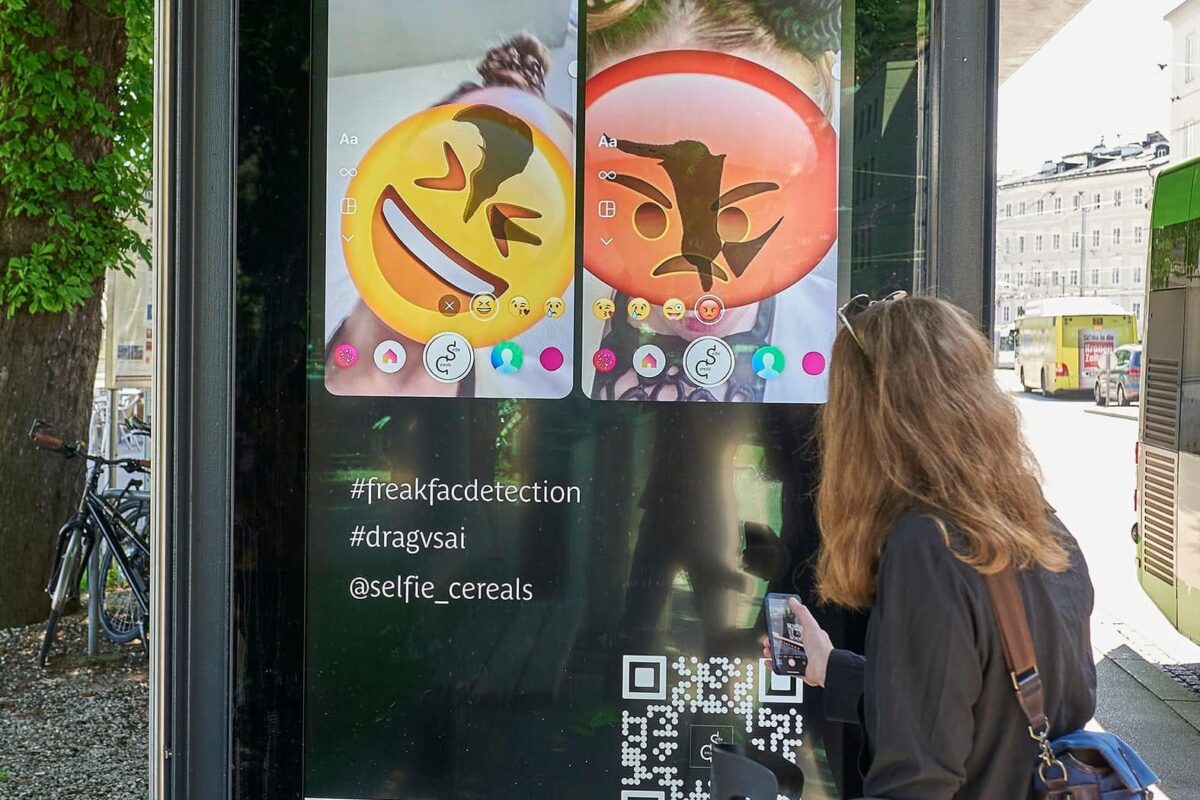 Selfie Cereals is a collective founded by Margareta Klose & Verena Tscherner 2020 in Vienna. Selfie Cereals is a selfie filter project on Instagram and an ongoing practice of reflecting on social networks, on how facial representation is embedded within face recognition and identification processes in digital and urban space in Vienna, Austria. This practice is following certain rules of CV Dazzle, a technique developed by artist and researcher Adam Harvey for camouflaging faces against face detection systems. These systems turn images of faces into mathematical formulas, which can be analyzed by algorithms. CV is short for computer vision. While the camouflaging technique uses cubist-inspired designs to thwart the computer’s face-recognition software,[1] Selfie Cereals don’t use make-up or analog masks, but use face filters against face recognition instead.

For practicing Selfie Cereals, the performer holds the smartphone in front of the face to create an immediate spontaneous selfie within the frame of the provided digital face filter and with a special gadget, a sticker acting as filter placed on the camera to create black dots against face detection before the algorithm detects and catches the face. 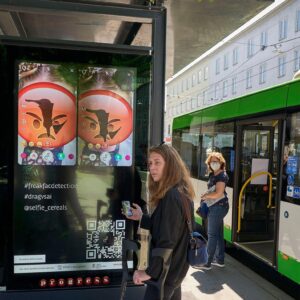 Although empowering the subject by placing it at the center of vision and on a stable ground, linear perspective also undermines the viewer’s individuality by subjecting it to supposedly objective laws of representation. Contemporary philosophers and artists point at a condition of groundlessness caused by the virtual ground that creates a vertical perspective of surveillance and overview in far distance and close-up. The observer becomes a floating drone and can get an overview of an imaginary stable ground. It is a superior remote-controlled gaze onto inferiors. In photography the gaze has now become mobile and mechanized, but these new relational technologies disembody and outsource the gaze: It becomes all knowing, intrusive, extensive, micro and macroscopic, an extreme radicalization of linear perspective’s powerful paradigm. Many selfies on Instagram are photographed from above, from the bird’s eye perspective. The photographic lens, this tiny smartphone crap, is not indexically related to reality but to hyperreal representations: not of space as it is, but as we can create it.[2]

The selfie replaces the mirror’s reflection; mirroring is fundamental to human survival. Aby Warburg’s notion of contemplation and remembrance is bound to fear rather than nostalgia or a desire for belonging: to overcome the phobic pressures of reality. Warburg’s Pathosformel asks how emotionally charged visual images, metaphors, tropes travel temporally and geographically. How do I embody these images and how do I perform those? How do selfies transmit gestures, emotions and expression? How do Selfies migrate as common tropes across cultures as communicative and cultural memory?

Selfies are an interesting medium to observe intersubjectivity: How these face images are constitutive for the subject’s constitution process? Social media is providing new possibilities for everyone: mass media offers access to autodidactic pictorial competence in the digital frame of tracking, gamification and surveillance. New media dispositives are developing with new practices of cognitive and affective self-reflection. Selfies are individual self-concepts as much as the mediatized face is a stage for the facial regime and community, an arena for strategies of subjectivation and de-subjectivation. Selfies got viral, continuously reproduced.

Selfie Cereals develop new flexible and mobile competences to deal with mass media, social media and all these new distribution processes. It seems necessary for artists to be present as a spectacular marketing image in social media: networking instead of working in the studio. Taking selfies on Instagram has become a mobile artistic practice and it is worth reproducing.

Renate Lorenz developed three “drags” for naming certain artistic practices of body performance: transtemporal drag is freaking (counteracting) economic or scientific or heteronormative courses of life. Drag is a practice to freak out. Performers practicing radical drag are freaking out about the dichotomies that constitute us. “’abstract drag’ – the masking of the original creator of the spoken text and its contexts, as well as passing on the voice – produces an altered situation of communication[3].” Lorenz provides us with seven freaky methods for how to freak out: queer performance artists should be freaking the borders between perception, reception, documentation and fiction as well as the boundaries of conceptions of the body, the self, art theory, and truth, and developing other figures of difference.

Cellotapeselfies or masking are non-conventional tools, but still self-reflective representations of the self framed in the digital grid. They are “boundary objects,” created by their actors, and mediums for communication and stabilization. The boundary object represents a mode by which relations between heterogenic, technical and social practice and groups become possible: „Objekte, die in einer lokalen Anwendung präzisiert und zweckgerichtet verwendet werden, aber zugleich in einer umfassenderen Zirkulation zur Verfügung stehen, ohne ihre Identität dabei zu verlieren.“[4] The concept of dispositive,[5] „mediale Reflexivität”[6] or „Mediatisierung”[7] explores the relation between media-communicative and socio-cultural change. Selfies are individual self-concepts as much as the mediatized face is a stage for the facial regime and community, an arena for strategies of subjectivation and de-subjectivation. Masked selfies are critical gestures that reflect up on face detection. As Ramon Reichert suggests, Facialization and De-Facialization should not be seen as a dichotomy of face and face dissolution,[8] but as a critical self-reflective practice in-between De-Mediatisierung and Re-Mediatisierung embedded in the facial regime framed in the social network’s economic digital grid. Masking or dissolution of the face is a practice of reflecting on social networks, on how facial representation is embedded within face recognition and identification processes. But practicing within this frame cannot fundamentally change the dispositive of face detection. The trend towards anonymity instead is a gesture of critique: The old-fashioned image needs to be changed, users are now communicating with „reflexive Re-Mediatisierungen[9]” and criticizing being instrumentalized as digital human resource.

Digital simulations are an interesting phenomenon within the frame of communication platforms and games, including their abstractly simulated situations. Senso-motoric action is simulated and reflectively communicated bigger than life – and due to all-body-interfaces larger than evidence. Nowadays, every laptop/cell phone includes an integrated webcam. The webcam is reminiscent one of 1990s pop culture journalism and is now playing an increasingly important ironic role within the simulation’s frame. There is always an individual subject in the webcam’s position. This apparatus implies a new ironic role of a controller-inspector: the author becomes both subject and object of this technology. The installed webcam is also a simulation within the ironic game of direction, perspective and reception. The position of the webcam and its location are still my own choice.

Some argue that in a few decades, when the Internet of All-Things will allow intelligent machines to talk to each other without us, “then these new cybernetic systems can replace us and we will hit an ontological skeuomorphism.[10]” Images have already replaced writing; selfies mirrors; (sur)face the Antlitz.[11] And will the human being become just a nostalgic feely-freaky ornament of the Internet of All-Things? Warburg’s notion of contemplation and remembrance is bound to fear. Remembrance never can be a singular activity, for an individual’s memories incorporate already collective memory. The capacity of the feely-freaky human being to apprehend emotionally charged forms keeps me up, creating the space of contemplation, reflection, communication and connection. How does competence become performance? Who will you and me have become again?

[2] Hito Steyerl, In Free Fall: A Thought Experiment on Vertical Perspective, in: Hito Steyerl, The Wretched of the Screen, Sternberg Press Berlin 2012, 12.